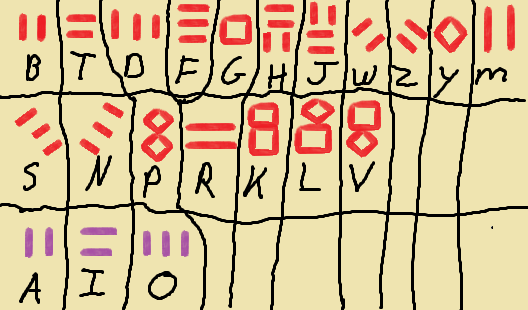 So I’m not going to torture you by posting “The Annals Of Trade“, but as I’m writing a high fantasy novel for Nano, I thought I would share some of the world building and other crazy stuff. If you want a tiny bit of background look at my Nano 20 Questions Tag.

A boy strode through the forest.

The Featured Image is the Containsian Alphabet. It is properly known as the batid. Pencils have two points.

“The poor can be richer than the rich if they have peace.”

“Sam” will be the name of my baby dragon for the whole of the first book. Later on he will gain three longer, more pretentious, and meaningful names.

Peson sat in the By eating a meal when the door opened and one of his best friend’s came in, Zimran.

A year varies in number of months and starts when the first peach shipment arrives in Hibroolby.

He stood by Sam´s side as he listened to the questioning ceremony.*

*Side Note, but this may be my favorite of the attempted beginnings.

The smallest Containsian unit of length is the Toe. The toe is the length of a big toe, about one and a half inches long.

“Rules and laws were made to ensure everyone has the best possible time, breaking them makes someone else feel bad.”

Rice and maize are the most common grains of Containsia.

At the bottom of a cliff sat a boy, behind him stood an old man and stag.

I thought I had another beginning of a chapter written on paper, but I can’t find it. So I’ll end this rather odd post here.

I am a young United States citizen. I've been mostly home schooled. I have no plans to go to college or university, but I plan to never stop learning. I'm the second youngest of seven. I love to teach. I feel called to design and sew modest clothes. I adore reading and chatting about books View all posts by Esther Jackson